Genesis – How it all Began

The #Endsars protest started in 2017 and lingered till this present moment as a result of negligence. Whose negligence? Of course that of the government! The protest started peacefully online (twitter) in 2017, against a series of reports of police shooting unarmed youths of Nigeria. The evil which was mostly perpetrated by the Special Anti-Robbery Squad (SARS) of the Nigerian Police Force. The protest however took a new turn in 2020, when the same unit was accused of killing a boy in Ughelli, Delta State. When the video of the SARS vehicle chasing the boy appeared on the internet, it incited anger. An anger which led to a mass protest, that gave other citizens a chance to narrate their experiences in the hands of this notorious police unit. One of the popular stories that gained media attention was the case of a young man Chijioke Illoanya. According to the sister, her father was made to swim “in a river filled with dead bodies to see if he can find his son” 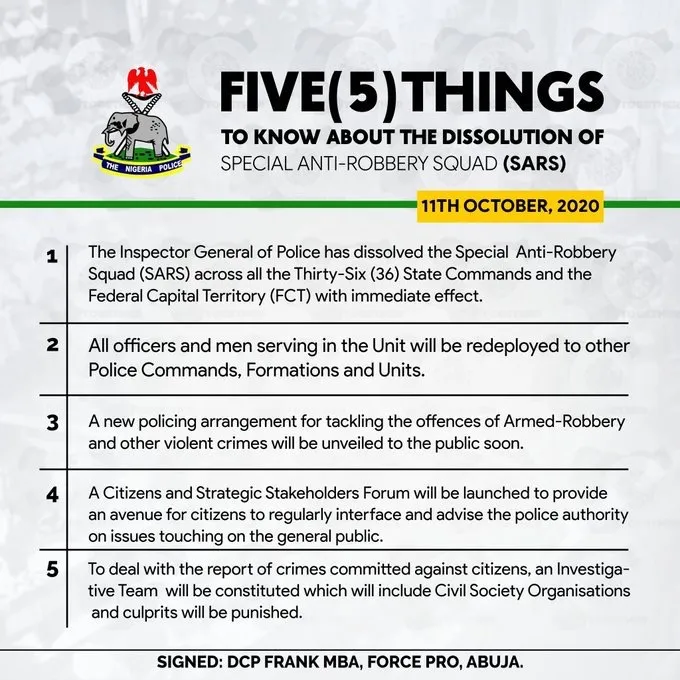 What Was Done to the SARS Unit?

The Nigerian Police authorities in October 2020 established SWAT to replace the supposedly disbanded Special Anti-Robbery Squad (SARS) unit of the police force. However, the news was met with mixed reactions from concerned Nigerians. Many claimed the SARS unit was only and craftily renamed SWAT. Subsequently, various training videos of the SWAT team appeared on the internet. According to social media comments, the training program is substandard, hence, people started mocking the Nigerian police authorities. Here is a link to one of the popular videos: Nigerian SWAT Training Video

Revelations – Where are we now?

At other times, they affirm the presence of the military men, but refused that they shot at protesters. The cover-up went on and on…

To douse the tension, a judicial panel was set up on October 19th, 2020, to look in Lagos, to look into citizens complaints of human rights abuse by men of SARS. The panel, however, after the incident of October 20, 2020, expanded its terms of reference to look into Lekki shooting. According to Punch Newspaper reports, the panel which sat for one year, receiving testimonies of petitioners, witnesses, experts and lawyers,, treated 235 petitions  and awarded N410 million as compensations to 70 victims.  Meanwhile, After back and forth at the panel, Nigerian Army admits deploying live rounds but insists only blanks were used.

On November 15, 2021, the Justice Doris Okuwobi-led panel of inquiry on the restitution for victims of SARS-related abuses, Lekki Shooting and other matters submitted a 309-page report( Download PDF here) to the Lagos state governor, Babajide Sanwoolu. The report established that 9 persons were gruesomely murdered by the Nigerian Army, four remain missing, while 48 names were classified as casualties of the Lekki shooting.

The panel in their recommendations suggests that men of the Nigerian Army excluding Major General Omata deployed to the Lekki Toll Gate on October 20, 2020, be made to face appropriate disciplinary actions, and/or stripped of their status and dismissed. Also disciplinary actions should be meted out againstMajor General Godwin Umelo and Lt. Col S.O. Bello, for frustrating the panel investigation by their choice of refusing to honour the panel invitations.

However, the Sanwoolu led government faulted the panel’s report by describing the claim of the panel that 9 persons were gruesomely shot dead as “assumptions and speculations”. Mr Governor disclosed this in a white paper released from his office sequel to the panel submission of their report.

The repercussion of this action by the government has continued to feed the rope of distrust between the government and the people. Nigeria as often said is sitting on gunpowder. The actions by arsons, post Endsars protest is only a revelation of the amount of damaged youths we have. Those who have nowhere to call home and vulnerable to politicians to perpetuate their evil course. They were hired severally during the protest to disrupt the protest, hijack it and cause mayhem. Although they failed on several occasions, the Lekki shooting created an opening for these damaged citizens to inflict pain on fellow Nigeria; burning public facilities.

Two rumours about possible backstory behind her death have begun to circulate ...stupidity of patriarchy justification

Your clothes can prevent trafficking. My TEDx Talk

Oh yes, I felt moved and empowered by the multiple feedback in black and white, in a glass with my name on it. These positive feedback affirmed my vision to restructure global cash-flow in the retail of consumer goods, to increase the income margin for people actually making our goods.

Business in fashion. 35 careers, which is for you?

Now, it is important not to forget that fashion is all about the unique aesthetics you create. Also that the fashion industry offers you a great opportunity to explore different jobs, services or professions. Being smart means you have to carve out your own niche and build a business around it. And guess what, there are a couple of ways to actually start this business from home, with very little investment needed.

The Magic. Build Businesses In Africa

We have launched our tribe and we are working to build businesses in Africa. Imagine this! Imagine what 3000 of you can create - cross-continental...

To be updated with all the latest news, offers and special announcements.

This website uses cookies to improve your experience while you navigate through the website. Out of these, the cookies that are categorized as necessary are stored on your browser as they are essential for the working of basic functionalities of the website. We also use third-party cookies that help us analyze and understand how you use this website. These cookies will be stored in your browser only with your consent. You also have the option to opt-out of these cookies. But opting out of some of these cookies may affect your browsing experience.
Necessary Always Enabled
Necessary cookies are absolutely essential for the website to function properly. This category only includes cookies that ensures basic functionalities and security features of the website. These cookies do not store any personal information.
Non-necessary
Any cookies that may not be particularly necessary for the website to function and is used specifically to collect user personal data via analytics, ads, other embedded contents are termed as non-necessary cookies. It is mandatory to procure user consent prior to running these cookies on your website.
SAVE & ACCEPT
MORE STORIES

Equal opportunities for all is bullshit!

Joadre - October 12, 2018 1
Lets adapt the word Equity rights, which simply means providing opportunities to make all equal, NOT giving them equal opportunities. There is a significant difference. Here is a rather deep example into history; descendants of people who have suffered decades of slavery should be given "much more" opportunities to become equal in the society. These opportunities would address every aspect of physical and phycological trauma imposed on them from generation to generation.

Joadre - April 16, 2020 0
If you want to venture into entrepreneurship, but are afraid that  the risk might be very high, the capital too much and maybe you...

Blueprint To Succeed in 2020

Joadre - July 20, 2020 0
I love the part that he debunks the whole marketing industry approach of manipulation. Simon actually really articulates the situation so well, that I felt like he listened to my million thoughts and then crafted out a romantic business essay about it.